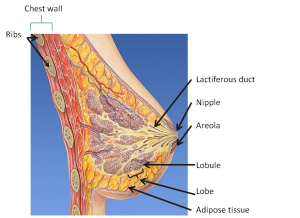 Breasts are made up of lobules and ducts which are supported in the breast by connective tissue, ligaments and adipose tissue. Cancer tends to be formed within the lobules (lobular breast cancer) or ducts (ductal breast cancer).

Lobules are small round sections which are lined by milk producing cells. Ducts are the tubes which join the lobules 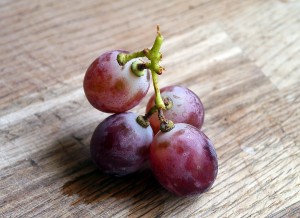 together and then lead towards the nipple. They’re arranged like a bunch of grapes.

Adipose tissue is ‘fatty tissue’, and the ligaments within the breast are called ‘Coopers Ligaments’.

The breast lies on top of the pectoral muscle and ribcage.

The image on the left shows these different tissues and there is also an excellent video here (produced by Standford Medicine) which provides further detail.

The breast is a modified sweat gland! The milk producing parts of it are known as ‘glandular tissue’.

The glandular tissue is denser than the fatty areas. When you have a mammogram the denser glandular breast

tissue shows up whiter on the image and the fatty areas (also known as adipose tissue) show up darker. Women’s breasts differ in terms of the amount of dense tissue compared to fatty tissue. Many factors influence this. They include: genetic factors, pregnancy, if the woman has had children, age, hormones and menopause.

If we take hormonal changes as one an example; during the menopause the breast tissue becomes less dense (more fatty). In general women who are younger and premenopausal have denser breasts (less fatty) than older, postmenopausal women. If we look at genetic factors as another example; there appears to be a family link to having dense breasts which is likely to be related to some genetic factors and these specific genes are currently under study. You may find the site Dense Breast Info useful. This is an extremely informative site but written for and American audience so the various imaging options may not be relevant in other countries. Do speak to your GP if you have any queries though. This video from the American National Cancer Institute may also help